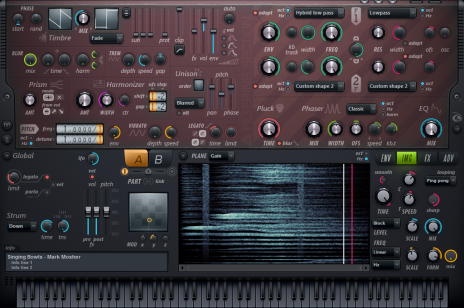 Image-Line just released their brand new Harmor Virtual Syntheiszer. And by brand new, I mean a few minutes ago and they even have a list of known issues they are going to fix tomorrow according to this post:

As you can see from the screen shot Harmor seems to be an evolutionary next step for their wonderful Harmless synth. The help file says:

Just like it's predecessor Harmless, Harmor is powered by a powerful additive synthesis engine. Its modules will look familiar to subtractive synthesizer enthusiasts: oscillators, filters & phasers, these are featured in Harmor but, because they are performed through additive synthesis, offer more freedom.

Additive / subtractive synthesis – In Harmor no audio-stream exists, instead a table of frequency and amplitude data is manipulated efficiently, accurately and in ways not possible with traditional methods, that process an audio stream. Draw filter shapes and gain precise control over every aspect of the sound generation process.

Image & Audio Resynthesis – Images and audio files can be dragged and dropped on Harmor to provide 'sampler-quality' reproduction of sounds or work with image-based synthesis when used in conjunction with your favorite image editor. Just cut-and-paste between Harmor and your editor of choice.

I loved Harmless (and did a free sound set for it) so I’m really excited to start working with Harmor, especially since it supports the ability to import audio for resynthesis. In the screen shot at the top of the post I imported a waveform from my “Outpost Experiment” source content and use the X/Y pad to change direction and speed of play head through the harmonic content – similar to wavetable synthesis. I’ll post more after I get more time with this instrument. For now check out this video from Image-Line.

I can assure you the synth does more than make dubstep sounds ;^).