I went to the Depeche Mode concert at Red Rocks a few nights back. This is my report including iPHone pictures and some behind-the-scenes info I’ve dug up.

I read that Dave Gahan lost his voice and the band cancelled shows a few weeks back. He definitely was a little rough the first few songs but after he got really warmed up he sounded great.

They played probably half of the songs off the new album. They did a nice job working in old songs as well and played the big hits and a few lesser known songs as well. I really was happy that they played “Walking in My Shows” from Songs of Faith and Devotion, “It’s No Good” off of Ultra and “Precious” off of Playing the Angel which are some of my favorite songs. They didn’t play some iconic old hits like “People are People”, but with only 2 hours and such a massive catalog I can see why. Of course they played the killer tracks from Violator such as “Enjoy the Silence”, “Personal Jesus”.

They did a great job translating the songs to the stage and the core synth sounds that make the songs great were all in the mix. They also did some fun remixes as well. I especially liked some of arrangements that were really stripped down and sung by Martin Gore. They provided a nice contrast and his vocals were extremely strong.

One the best songs in the whole show was the last song when Dave Gahan and Martin Gore sang “Waiting for the Night to Come” accompanied only by minimal arpeggiated synth. 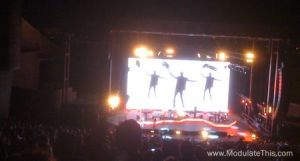 Behind the band was a massive LED wall that filled the whole back of the stage from which they projected supporting visuals. It looked great most of the time although when the background was white you could see some wear-and-tear from being on the road. I loved 95% of the VJ work and visuals, especially when they were mixing in the live feeds. Intercutting between players and moving the images around the screen really added to the energy of the songs. A few of the videos were just a bit odd, were pretty static,  and didn’t fit the tone of the rest of the show IMHO. See links at bottom for more info on the LED panels used in the show.

BEHIND THE SCENES
From my vantage point it was really hard to see what keyboards Martin Gore, Andrew Fletcher, and Peter Gordeno were playing live as the keyboards were on stands that blocked the view of the back side of the synth. After Googling around a bit, I found some nice photos on John Grabowski's flicker album from the Chicago Lollapalooza show where they keyboards are exposed and you can see that they are using Access Virus TI’s and a Virus TI Polar.

If any readers have more detail on the rig, please leave comments.

Ableton just posted this video on YouTube which offers a very cool behind scenes view of how Kerry Hopwood is using Ableton Live to process drums live on the tour.

Update: I found this cool Time Laps video of the show plus load out at Red Rocks. Watching the 4 hour load out will really make you appreciate how much work goes into a show like this. The video is only the Depeche Mode site so click here to see it. 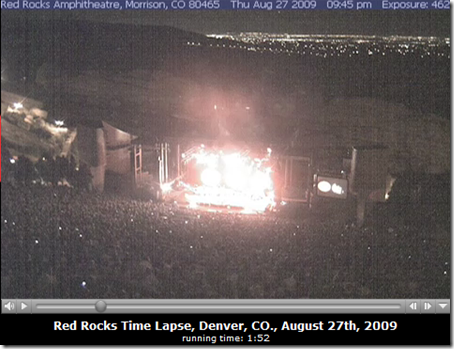 DEPECHE MODE’S TAKE ON THE SHOW
Depeche Mode recently blogged about this show and posted a photo album here. They said

“This was one of the most high-energy crowds I've ever seen. Every element was perfectly in place. Sound. Lighting. Enthusiastic audience. Weather. Setting. The night ended up being one of our most memorable performances.”

Conclusion – the show was pretty epic. They played for just over two hours. Seeing the band at Red Rocks was awesome and I was happy that they had a massive turnout. I really like when 80’s bands like Depeche Mode don’t go the route of a “nostalgia” act but play new material. This means less room in the set list “iconic” older hits, but I feel this makes the band more relevant.

If you are Depeche Mode fan or a fan of electronic music I think you’ll find this show entertaining.