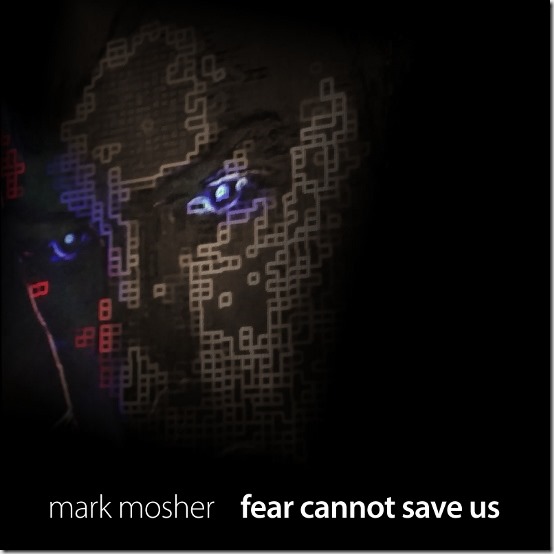 My album Fear Cannot Save Us turns 5 years old today! While I’ve released singles such as “Disconnected” and podcast episodes on Sonic Encounters – this was my last full studio album. Three years in the making, it was album #3 in a series of alien invasion concept albums containing original cinematic electronica, dark ambient, and experimental tracks.

To celebrate the occasion the album is available at special pricing on Bandcamp for $5 US for the month of March. The Bandcamp edition also features a 10 page digital booklet with liner notes and photos.

It is also album is available at standard pricing on all major outlets including Spotify, iTunes / Apple Music,Amazon MP3, Google Play, CD Baby and more.

Making of the Album

… This last week he put out a new album Fear Cannot Save Us, which is a continuation of the science fiction themes from his earlier albums Reboot and I Hear Your Signals, but is also one of the finest classic electronic music albums I’ve heard in a while. So I took the opportunity to quiz him on the making of the album, how he mixes sci-fi themes with electronic music, and how he produced such an excellent sounding product.

Note, the album was mastered by Gannon Kashiwa. I did the cover with art direction assistance from Dave Weed and Victoria Lundy (Cuttlefish Arts).

It tells the story of the transformation of a human to an alien hybrid being. The album takes you through our hero’s journey as they rapidly coevolve and become self-aware and aware of their mission for revolution. Assuming evolution does not imply direction, could the change benefit mankind?

On another level this album is also allegorical. It’s about tolerance for people who seem different and strange to us. It’s also about people accepting change in themselves. On a third level, the album and the series are a nod to my love for classic Sci-fi films

The albums in this series are orchestrated with classic and contemporary synth sounds and loaded with sound design “ear candy” for synth and Sci-fi fans looking for a soundtrack experience for an epic movie yet to be filmed. If you listen to the tracks in album order, the story unfolds, and the titles of the songs give away the basic plot of each scene, but it’s left up to you – the listener – to fill in the story details. Each song was written to stand on its own as well. The dynamic arrangements and production will reward you for listening with high-quality headphones, stereo systems, or home theater systems.

Bringing this album to life is the culmination of over three years of work. This work included going deep and studying the sound design possibilities of a small number of monster digital synthesizers such as Absynth, Zebra, and ElectraX, as well as circuit-modelled analog synthesizers such as ACE and Saurus. To give the album an organic feel and sense of place, I manipulated my field recordings using Ableton Sampler. I also worked to find ways to “see through the eyes” of great guitarists, not to emulate guitar tone per se, but to instead apply concepts like non-linear distortion and wave shaping within feedback circuits to add more dynamics, emotion and expression to my sounds and performances. I hope you enjoy the sonic detail and emotion that will emerge and evolve with multiple listens.

Make sure you check out the other entries in the series, Abum #1 – “Reboot” tells the tale of the original alien invasion from the human point of view. Album #2 – “I Hear Your Signals” – tells the same story but from the alien point of view with inverted emotional curves.

Thanks again to all who have supported this album throughout the years.