Listen to Podcast on Soundcloud

Ready to take a “trip” on the The Georgetown Loop Railroad? Your journey starts at Devil’s Gate Depot as you stand between the cars and hear the sounds of this historic narrow gauge train as it rounds a tight bend. Things morph from there… enjoy the psychedelic ride.

I recorded these field recordings on The Georgetown Loop Railroad which is about 45 miles West of Denver. 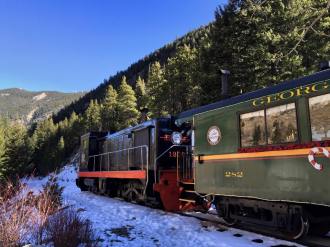 The engine and a passenger car

My view as I recorded these sounds

A view of Devi’s Gate bridge from the ground

A car in the yard being restored

A view inside the passenger cabin

“one of Colorado’s first visitor attractions. Completed in 1884, this spectacular stretch of three-foot narrow gauge railroad was considered an engineering marvel for its time. In 1973, the Colorado Historical Society began restoring the railroad as part of its 978-acre Georgetown Loop Historic Mining & Railroad Park.” More here… http://georgetownlooprr.com/.”

I’ve lived in Colorado since I was 7 and had never been on this train! They have all sorts of themed runs (Octoberfest, Dinner trains, Big Horn Sheep Festival…) and I highly recommend you try it you come out Colorado way. We took the “Santa’s North Pole” adventure 12:40pm run.

While I was not allowed to travel between cars (because it’s a narrow gauge  and runs along mountain drop offs and on high bridges), they allowed me to stand outside the closed door of the car between cars. This being the case I got some AWESOME recordings isolated from other passengers for the most parts. Lots of great wheels squeaking, flexing of the old cars, coupler noise, and sometimes engine noise. 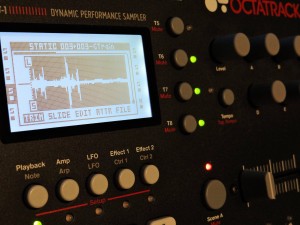 I used only the Elektron Octatrack. I configured the machine to use 4 tracks made up of 3 field recordings from the session mentioned above each with their own insert effects. One track was used twice with a different set of effects. I also had the Octatrack configured to use track 8 for two master effects.
After setting up the patch for the Octatrack, I rehearsed the piece a few times experimenting with different effects, expressive morphs, and notes. I then recorded the piece in one real-time pass without edits.

The piece begins with the raw field recording of the train as it goes around a tight turn. It’s just such an amazing set of sounds I wanted to offer the listener context and a taste of the harmonic content of the original source material before I took things to another place. I then manually play and improvise from there performing the notes in chromatic mode and heavily manipulating the field recordings as the piece progresses.

Near the end of the piece I’m using effects like comb filters to create what sound almost like long tremolo strings. Another fun thing for me was manipulating rail noise through a comb filter and delay and then changing the delay time (which changes pitch) to create what almost sounds like an arpeggio of pizzicato strings notes.

It was a super fun piece to create and perform as the train field recordings offered some amazing harmonic content! I’ll most likely revisit these source samples in a future episode.

Listen to Podcast on Soundcloud