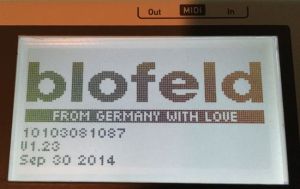 Another update: I noticed 1.23 is no longer available on Waldorf’s site. I’ve emailed them to find out more.
Update: 2TThis is a long article and I’ve rendered it as pdf and Open XML paper so you can read this offline and print it.

Blofeld users rejoice! Waldorf has released a free firmware update for the Waldorf Blofeld synthesizer. It’s kind of a life changing update in that it allows you to transfer only new samples from a new Program in a Program List rather than transferring all samples in a program list – hooray!

Most seasoned Blofeld users seem to be having trouble getting the new features working – boooo!

I did figure it out after about 3 hours of research and trial and error and wanted to pass along my findings to save you time. Yaaay!

Details and secret sauce of how to get new features working is below.

There are no release notes, but Waldorf posted the following on Facebook:

The new Firmware in combination with Spectre 1.00 only transfers missing samples and not the entire collection. Example: When you transferred already e.g. 4 samples and you like to add an additional one, there won’t be transferred 5 samples to the Blofeld like in the past, but only the missing one….

We wish you much fun,

The new OS is version 1.23. For those on the keyboard edition there is also the  Blofeld Keyboard Controller Firmware 1.4 update. You can download the updates here http://www.waldorf-music.info/downloads-blofeld-en/blofeld-firmware-en.

Spectre (a tool for creating and transferring Sample Content for Waldorf Blofeld with License SL and Waldorf Blofeld Keyboard) has also been updated to v 1.00 (the previous version was .091) and is required for the new features to work. Grab the Windows and Mac versions here http://www.waldorf-music.info/downloads-blofeld-en/spectre-downloads-en.

Before you do any of the following steps make sure you have backups of your blofled programs and Spectre Program Lists. While everything I’m about to relate works for me, your mileage may vary so I’m not responsible for crashing your blofled or loss of data – yo!

2 – Install the Spectre app and run it

4 – Click the “Audio/MID…” butt on Spectre to configure the Blofeld for input and output.

5 – Click the “Upgrade” button and select the .mid file and the update will be transmitted. 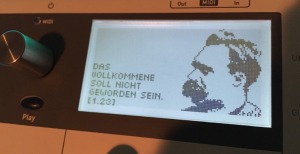 NOTES ON NEW FUNCTIONALITY AND BEHAVIOR

All the information below is for those with the Blfoeld keyboard (which implicitly has access to the 60M of sample memory, or those with the Blofled Desktop with the License SL Sample Option (not needed with Keyboard editions). I tested using the blokeys with Spectre running on Windows 8.1 via USB MIDI port.

CAUTION: The new functionally works perfectly if I start with a new BLANK program list. This DOES NOT work if you open a program list created with an OLDER version of Spectre. However, simply open the old Program list using the “Load” button, Save it again (I used a different name), reload it, then transmit. In other words, something changed in the XML file format.

HOW TO USER SPECTRE TO TRANSFER A NEW PROGRAM LIST AND SAMPLES WITH 1.23 FIRMWARE

This behavior is mostly the same as with the previous versions, but I wanted to run though it for those new to all this and to show some of the differences after the update.

Make sure you map BOTH input and output in the “Audio/MIDI…” settings are mapped to “Blofeld”. I was in the habit of only mapping the output. The new Spectre needs the input to be mapped so it can handshake to receive checksums. This allows Spectre to calculate the diff so it only needs to send new samples.

If you create a new program list with associated samples and then “Transmit” to Blofeld it works as expected with a few new intermediate dialog boxes. As with previous versions, you’ll first get the dialog box with estimated transfer time. 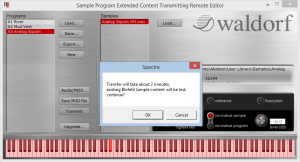 Next is a new dialog where Spectre request “Hash codes…” from the hardware to determine what’s already loaded in memory.

During this process you won’t see any screen changes on the Blofeld hardware. Instead, you’ll just see the MIDI light popping off.

Once Spectre determines where in memory it needs to put the file it’s business as usual with the “PLEASE BE PATIENT DURING TRANSISSION OF BLOFELD SAMPLE CONTENT” screen appears. 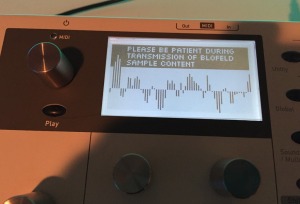 You’ll see the status dialog pop-up on Spectre as files programs & corresponding samples are sent to the Blofeld.

Once all the content has been received you’ll see this screen.

Once the Blofeld restarts it’s business as usual and as before you select OSC, then use the “Shape” param to dial up to the 200s where the samples live and can now be used as Oscillator sources.

NEW!!! – USING SPECTRE TO TRANSMIT ONLY MISSING PROGRAMS AND SAMPLES IN A PROGRAM LIST

In this use case, you’ve either just gone through steps in the previous section, of you have loaded an existing Program List .xml file. Now you want to add some new Programs with corresponding samples to the Program List. For example, I added a new program “A4 Singing Bowl” which use a small sample. 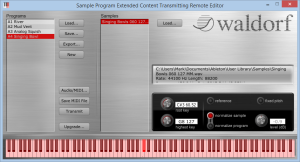 In the previous version of the OS and Spectre, ALL of the program information and samples would be re-transmitted which could take a very long time if you had many megabytes of sample data. Now pushing the “Transmit” button only sends what’s new (or as Waldorf puts it “what’s missing” form the Program List).

There is a bug though Spectre’s prediction on how long it will take to transmit the program list is incorrect as it is based on time to send all samples not just diffs. In the example about, the sample is really small and Spectre predicted 2 minutes for the xfer when it took 30 seconds in reality. 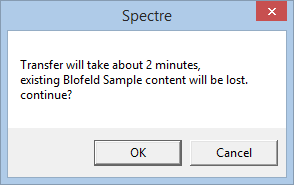 Then – bam – ONLY the new sample is transferred. THANK YOU WALDORF!!!

The process is the same at this point as in the previous section. Then once the transfer is complete, voilà, you can now access all the samples including the new one. 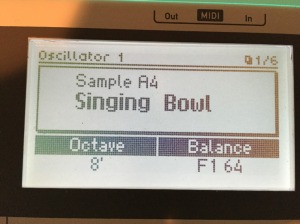 After installing this update it struck me how unusual it is to have an instrument that was released in 2007, is still sold as new today, is still getting updates, and still has an active user community on Facebook. Bravo Waldorf! Now please get right on OS V2 :^)

I’ve written quite a few articles on Blofeld and the synth has it’s own category http://modulatethis.com/blofeld.

If You Found This Article Inspiring or Helpful

If you found this article inspiring or helpful consider supporting the blog by leaving leaving a tip below. Other ways to support the effort include buying some of my original music, or just spreading the word about my art and blog. Thanks again.

Tip for Modulate This! article

Thanks again for reading.

Video on My Music Releases and Subscriber-Exclusives