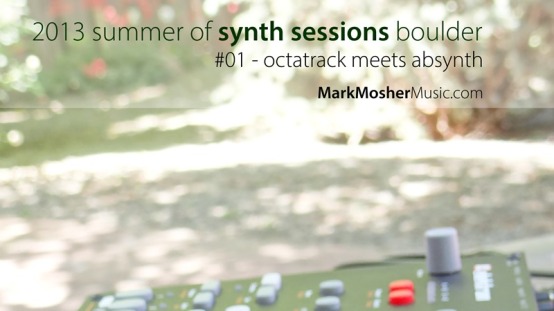 I’m just getting started with the Elektron Octatrack performance sampler but I decided it would a perfect instrument to kick off a summer sessions as it’s possible to do entire compositions with effects from this one box. I’m finding that playing it from the front panel even without the sequencer can be incredibly expressive even though it doesn’t have velocity sensitive buttons. The secret sauce is in the morphing scenes. You can create up to 16 scenes each with it’s own parameter settings. You then assign one of these to either Scene A or B on-the-fly. You can then morph between the settings of each scene with the incredibly sensitive optical crossfader which causes the Octatrack to smoothly interpolate between A & B parameter settings. In a nutshell, you are able to control and perform with incredible amount of number shaping parameters in realtime.

I’ve seen a lot of beat-driven videos so I thought it would be fun to do an ambient piece. This piece is an original improvisation recorded in real-time in one pass playing Octatrack buttons in Chromatic mode. No sequencing is used. There are 3 tracks of audio samples being played. The source samples were rendered from Absynth and include

A custom absynth patch called Broken FM – pure FM synthesis. The piece makes heavy use of morphong with the crossfader, scene switching on the fly, FX morphing on on tracks and via chained effects (Neighbor Machine).

I didn’t intend this, but I happened to line the Octatrack up with the shadow of the roof. The piece is long enough and the shadow is close enough to the edge of the instrument that you can easily observe the earth’s rotation via the shadow movement. I finish right as the sunlight is about to hit the Octatrack. You can also see a reflection of the Aspen trees above me in the Octatrack’s display.

Note – the Octratrack display and LEDs are easily visible outside as long as you are not in direct sunlight.