Leon Theremin (born Lev Sergeyevich Terme) was born on this day, August 15th, 1896. To help celebrate I’m going to do a bit of a stream of consciousness post and will offer some links on Leon and his wonderful instrument and some notes on my use of it. Hang in there till the end of the post as I’ve created a Soundcloud set called “Theremin Action” which is a collection of all the songs from REBOOT and I Hear Your Signals that use that Theremin sound or Theremin as a Controller.

THE DAY THE EARTH STOOD STILL
As a youngster, I can vividly remember the first time I saw the movie The Day the Earth Stood Still. I was captivated by the sound of the Theremin in the film. In a related note, below is a pic I took of a reproduction of Gort last weekend while visiting Experience Music Project | Science Fiction Museum in Seattle.

According to Thereminvox.com, the Theremin in the film was played by Samuel Hoffmann and Paul Shure for a score by Bernard Herrmann. Thereminvox has a re-posted An interview with Samuel Hoffman from Down Beat magazine originally published on 02.09.1951 called “Dr. Hoffman Tells Whys, Wherefores of Theremin” which is a fun read.

THEREMIN IN MY MUSIC
I started incorporating the Theremin sound in my original compositions before I actually owned a Theremin. I did so by emulating the sound and performance with synthesizers and playing via keyboard. For example, the song “They Walk Amoung Us” from my album  REBOOT is loaded with Theremin lead lines. In my recent album I Hear Your Signals, I composed the song  “Arrival” which has a Theremin sound as the lead instrument in the second chorus. I created the sound using a patch I programmed from “init” with FAW Circle.

I GET A REAL THEREMIN!
In April I took delivery of a real Theremin – a Moog Etherwave. I did an unboxing review about it here. 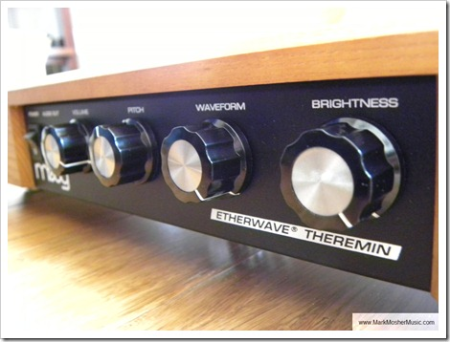 THEREMIN AS A CONTROLLER
While I am learning “classic” Theremin technique, I also began using the Theremin as a spatial controller to control virtual digital synthesizers running out of Ableton Live in combination with Percussa AudioCubes. This combination allows me to control 6 dimensions of sound without touching a knob or dial (volume and pitch from Theremin, 4 dimensions from AudioCubes).

I used the Theremin HEAVILY in the song “Control Zone”. All the pad, lead tracks, and unusual sounding guitar and bell sounds where played in real-time and recorded in one pass with only minimal editing after the fact.

I also used the Theremin as a controller in the song “Dark Signals” to play special effects sounds in various sections of the song.

STILL INTRIGUING AFTER ALL THESE YEARS
I’m using a Theremin when I perform live now. It’s just fantastic. I recently played a private event and used the Theremin as a controller and after the show I got a lot of questions about it and some requests to play it. After all these years and advancements in technology, people are still intrigued by an electronic instrument patented in 1928. Clearly, the notion that you can perform music and control sound using spatial movement is still intriguing.

CELEBRATE WITH MUSIC
As promised, here is a Soundloud set with all my Theremin related songs. Happy Birthday Leon! And thanks Bob and Moog Music.
http://player.soundcloud.com/player.swf?url=http%3A%2F%2Fsoundcloud.com%2Fmarkmosher%2Fsets%2Ftheremin-action&secret_url=false
Theremin Action by MarkMosher

Great post – and it’s interesting to hear how you’re using the theremin, too.